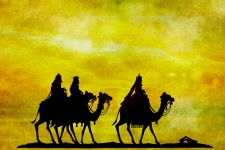 Each Christmas, songs are sung about the Wise Men or Magi that came from the east looking for the one who had been born.  Their story can be read in the Gospel according to St. Matthew (2:1-12).  The story is an old familiar one to most of us.  Sometimes it’s easy to pass over some spiritual gems because we’ve heard the story so many times.  So let’s take a closer look.

The Magi had been given a sign from God, a star.  They heeded that sign, leaving home and country.  They came from a great distance traveling as much as two years. They came not as curiosity seekers, but specifically to worship the King that had been born.

The Magi had seen “His Star in the east”, but then the star disappeared.  They continued on without the star.  When they came to Jerusalem, they had to ask people where this King was at. Then after meeting with King Herod (who tried to trick them), the star miraculously reappeared.  Not only that, the star also moved, guiding them to the child.  The star is one of the great miracles of this story.  Many people have tried to explain this star:  “It was the conjunction of Jupiter and Saturn” or “It was the appearance of a new star which shines brighter”.  However, the star appeared for a time, disappeared, then reappeared, and then moved.  This was not some natural phenomenon; God intervened in His creation with a special sign to direct the Magi.

When the Magi arrived before the child, their first act was to offer themselves in worship.  Then they were able to offer their gifts.  Amazingly, they were prophetic gifts; Gold was given, the gift for a king (remember the Queen of Sheba brought 4.5 tons of gold to honor King Solomon – I Kings 10:10).  They brought this gift proclaiming the child to be the King of Kings.  Secondly, they gave him incense.  Incense was to be offered only to God and only offered by a priest.  The prophetic meaning was twofold:  that the child was fully God (which is what Christmas is all about – the Incarnation) and that he was to be the High Priest in Heaven.  The last gift offered was myrrh.  Myrrh was used to embalm the dead.  This pointed toward the ultimate reason the child had been born: to lay down his life for the world.  St. Gregory the Dialogist wrote the following about how we can apply this to our lives:

“We offer gold to the new-born King, if we shine in His sight with the brightness of the wisdom from on high.  We offer Him incense, if we enkindle – on the altar of our hearts – the thoughts of our human minds, by our holy pursuit of prayer; so as to give forth a sweet smell to God by our heavenly desire.  We offer Him myrrh, if we mortify the vices of our bodies by our self-denial.”

These are just a few of the spiritual gems found in this story, enough to give us some good food for thought.  The Magi had a star which guided them on the right path.  We all need something to guide us on the right path.  Our Church , the Holy Scriptures, our devotional studies, our rule of prayer, seasons of fasting, etc, etc…all of these and more can certainly be a guide for us.  BUT. just like the star disappeared for a time, we may experience spiritually dry times.  When this happens (not if it happens, because it will happen), if we remain faithful (going to Church, praying, studying, fasting…even when we don’t feel like it), we will find ourselves on the right path, growing in our faith.  We may feel that our prayers don’t even reach the ceiling…but we pray anyway!  We may feel that we are getting absolutely nothing out of Church…but we go anyway!  We may feel a blank wall as we read the Holy Scriptures, but we read anyway!  Notice the common word “feel”…that should never be our guide!!  Our spiritual life and growth are not based on how we feel.  The Magi were excited when they first saw the star, but they continued on their journey even when the star had disappeared.  Eventually, the star reappeared and they reached their goal…the King of Kings.  Let us have them same faith when those spiritually dry times come our way!!!

One last food for thought:  Like the Magi, we should first offer ourselves to God in worship.  Then we will be able to present our gifts (good works, finances, serving in our Church, etc.).  Sometimes it’s easy to think that our acts of kindness and good works (even giving money) are enough.  The Magi remind us of the most important thing:  Worship of God!

May your celebration of Christmas be filled with the worship of God.  And may it bring you great joy and blessings.  Let’s remember (as a bumper sticker I saw said):

“Wise Men Still Seek Him” (so do Wise Women and Wise Children!!).