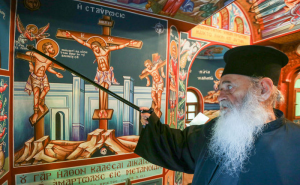 A true example of Orthodoxy recently passed away. Born George Raptopoulos, people called Father Gervasios “the priest of the poor,” “angel for the sons of the prodigal son,” and the “saint of prisoners” as he had an impact on countless lives all over the globe.

The same article quotes Father Gervasios as saying “If I die in a prison it will be the biggest gain for me. I want to die on duty, either on the way to a prison or on my way home. Christ died for the love of man. This is the finish, the perfect and the excellent.”

An Associated Press article from 2014 on Father Gervasios describes how in Greece, individuals convicted of offenses which carry a maximum five-year sentence can purchase their freedom, at an average rate of 5 euro per day during that time.

“With the rich at a clear advantage, Greek Orthodox priest Gervasios Raptopoulos has devoted his life to paying off the prison terms of penniless inmates.”

For those who do not qualify to purchase their freedom, Father and his ministry would provide inmates with funds to buy necessities such as “toilet paper and soap when the often meagre supplies provided by prison run out.”

“I went to prison because I was selling bread rings without a license,” said 60-year-old ex-inmate Dimitris Germanidis. “He paid the fine, and bought off my sentence and so I walked free. … He helped without knowing me, he didn’t even know who the money was going to.”

Thomas Kotopoulis, 66, also shared his story. “A fine had been issued against me,” he said. “Every day, the police would come to my home and say that, if I couldn’t raise the money I would go to jail. On the very last day, Gervasios came to help. It’s like he descended from heaven.”

In his retirement from the priesthood, Elder Gervasios still regularly travel to prisons to minister to those who were incarcerated. He would tour once a month to hand out “gift bags with clothing, a religious icon and toiletry items such as shaving materials, soap, shampoo and toothpaste.”

OCPM will use his example as guidance and motivation in our never-ending mission: To serve those who are incarcerated and their families, and provide resources, training and support to our ministry partners.

May Father Gervasios’ memory be eternal, not only through his good deeds but the good deeds inspired by his legacy.

Sign up for our email newsletter
PrevPreviousThe Fruit of Obedience
Next“Surely God is my salvation; I will trust and not be afraid.”Next