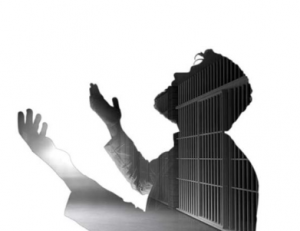 “Bring my soul out of prison that I may give thanks to Your Name.”

These words are familiar to most Orthodox Christians. They come from Psalm 142, are chanted at every Great Vespers, and they can teach those of us with a heart for inmates and prison ministry.

The psalmist is describing his own experience of prison. It may have been an actual, physical prison, or it may have been an emotional, spiritual prison. The latter can be just as painful as the former. Every person, including Orthodox Christians, has experienced what John of the Cross called, “The dark night of the soul.” In such times, a person feels the darkness, the fear, and above all, the intense loneliness of life in prison, even if that person is not actually living behind bars.

Volunteers who enter prison can fall into this category. As they drive into the parking lot of a correctional facility, to lead a service, or teach a class, or counsel an inmate, they are often feeling the burdens of life just like everybody else. They ask themselves, “Am I going to lose my job over this coronavirus? My father is in a nursing home and I can’t visit him. Is he okay? I really don’t like the guy my daughter is dating.” Some prison volunteers’ bodies may be free, but when they enter the facility, go through security, pick up their badges, and walk with their escorts towards the Chapel, they are carrying their own personal prison inside them. In such a situation, that’s a good time to pray, “Bring my soul out of prison that I may give thanks to Your Name,” as a request.

But then they enter the Chapel, and meet with their usual inmates for the usual service, class, or counseling session. There, they encounter a special inmate. He is serving an extremely long sentence. Some of his loved ones have died, and he was unable to attend the funeral. The inmate may even be in the Special Housing Unit, and therefore only leaves his cell to exercise and see the sky one hour a day. But despite his dark situation, that inmate is always smiling. He addresses the volunteer with kindness and gentleness, without the profanity or bravado the way most inmates talk. He eagerly receives the Word of God from the volunteer with a completely receptive heart. Instead of complaining, he talks about how God is blessing him, even in his stark surroundings.

Many of us went into prison ministry to be used by God to save the souls of inmates. But over time, we have learned that God has used the example of faithful inmates to save us.