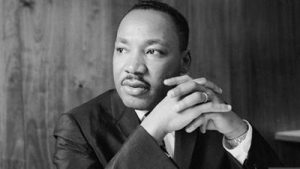 Every year we observe Rev. Martin Luther King, Jr. Day in honor of the civil rights leader’s achievements in advancing racial equality through non-violent protest. Dr. King’s peaceful approach, inspired by Christ and the teachings of the Holy Bible, revolutionized this nation and its trajectory.

Orthodox Christian Prison Ministry honors his legacy and all those who stand up to defend the oppressed. We do this by not only affirming the sanctity of each person but also by taking action! Our Lord calls each of us to not only think right but to act right. The approach we take through prison ministry is to build relationships with real individuals (sometimes for years) who have found themselves on the inside of a prison cell and are in need of healing. We walk with them hand-in-hand in their loneliness and repentance. In doing so, through the centering Grace of God, we are able to heal not only the individual but entire communities too.

Dr. King states, “life’s most persistent and urgent question is, ‘What are you doing for others?’” The movement led by Dr. King leaves a legacy that shows the power of love over hate and peace over violence. While some simply see MLK Day as a day off, use this as an opportunity to pause and take inspiration to serve others. Meditate on and recognize where in your life you may be short of treating each and every person as being made in the image and likeness of God. We all have work to do to see the face of Christ in the other. As you go about your day, take a moment to someone you wouldn’t normally notice.

According to the King Center, the civil rights leader was sent to jail 30 times. But being behind bars did not stop the Civil Rights movement. Just because someone is imprisoned does not mean they are gone and forgotten. They are not dead. In fact, one of Dr. King’s most famous writings, “Letter from Birmingham Jail,” came out of a period of incarceration. This letter was a response to 8 local clergy who issued an open letter of caution and concern pertaining to King’s movement. They argued for change through the courts, not through the streets. Dr. King answered that humanity has a moral responsibility to disobey unjust laws and to take direct action to change it rather than wait and hope for the courts to come through.

As Dr. King’s continued to fight for change while in jail, so many of our brothers and sisters who are incarcerated are living meaningful lives. They are not removed from the Body of Christ. They are not removed from the Church. This is true for Orthodox and non-Orthodox alike. As long as there is an opportunity for repentance, so the Lord is present with limitless forgiveness.

A recently released prisoner who learned about Orthodoxy while in prison was able to visit a church for Divine Liturgy for the first time. He said:

“They asked what brought me there; I paused before stating, ‘parole.’ They said, ‘That’s okay, Orthodox is full of repentant sinners.’ I weep now, as I realize the love and acceptance that was freely offered to me.”

May you too, in the way that each is able, be alert and ready to be the instrument of healing by accepting all sinners with open arms into the spiritual hospital that is our Holy Church.