Meet one of our Board of Trustees -﻿V. Rev. Archpriest John Kowalczyk! 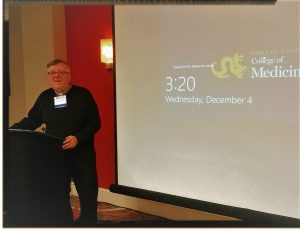 Orthodox Christian Prison Ministry is guided by a talented and dedicated Board of Trustees. We are highlighting their experience and expertise so that you can know who leads us.

Fr. John Kowalczyk is the Director of Field Education and Senior Lecturer in Ethics at St. Tikhon’s Seminary, contract chaplain at the SCI Waymart Forensic Treatment Center in Pennsylvania, and member of the Board of Trustees of Orthodox Christian Prison Ministry.

In 1975, Fr. John graduated from St. Tikhon’s Seminary and in 1981 received his M.S. in Religious Education from Marywood University. In 1996, Fr. John received his Candidate of Science in Theology (equivalent to a doctorate in the United States) from Moscow Theological Academy in Russia.

Fr. John received full privileges for group psychotherapy from the Fairview Hospital and Medical staff in 1994. He has completed over eight thousand Preliminary Religious Assessments on forensic inmates for the facility’s Treatment Team. His efforts led to St. Tikhon’s seminarians being able to pursue semester internships in prison ministry at the SCI Waymart, Pennsylvania.

The longest-serving adjunct faculty member of St. Tikhon’s Theological School, Fr. John began his career teaching in the Department of Pastoral Praxis in 1987. He has also been a guest lecturer at Drexel University’s College of Medicine, Marquette University, Villanova University, and the University of Scranton. Most recently, at Drexel Medical College, Fr. John presented a workshop at the Annual Forensic Rights and Treatment Conference called “Exploring the Spiritual Dynamic of Healing When Working through Bereavement, Especially When Dealing with the Trauma of Death Notification for the Mentally Ill Inmate.”

As a professor at St. Tikhon’s, Fr. John is also a talented writer and speaker. He has accompanied Fr. Stephen Powley on many speaking engagements and retreats. He was the editor of Your Diocese Alive in Christ from 1987-2005 and has written numerous articles and provided many interviews on the topic of prison ministry in order to raise awareness for this most important ministry.

He was ordained into the Priesthood in 1975 by His Beatitude, Metropolitan Ireney, of blessed memory, at the Holy Trinity Orthodox Church in Yonkers, New York. Fr. John has served as the Rector of St. Michael’s Church in Jermyn, Pa since 1985 and is the former Chancellor of the Diocese of Eastern Pennsylvania.

OCPM is so grateful to Fr. John for his longtime leadership, expertise, and wisdom. Axios!

PrevPreviousFinding the Ancient Church Behind Bars
NextWould you be ready to greet a released felon?Next