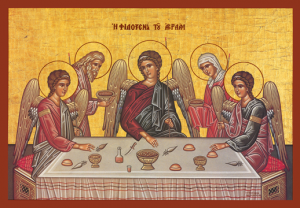 Would you be ready to greet a released felon?

After serving six years in prison, Greg was a free man. But freedom did not mean that the “residue” of prison life was suddenly gone. He would need months, perhaps even years, to fully adjust to life on the outside. For one thing, he still felt deeply ashamed of the crime he had committed and desperately needed forgiveness and acceptance from God and society.

While still experiencing the disorientation of his release, relocation and reintegration, Greg nevertheless made it a priority to find an Orthodox parish. He had discovered Orthodoxy while in prison through Orthodox Christian Prison Ministry. Through our Correspondence Ministry, Greg completed a catechism course. We also provided him with icons, books, and the writings of the Church
Fathers. And crucially, an Orthodox priest who had been trained in prison ministry visited him in prison.

All of this had a life-changing impact on Greg. Having experienced various non-Orthodox prison fellowships, he came to believe that Orthodoxy was the true Apostolic Church, offering the fullest expression of Christianity.

So with no car, and only Google to help him find the location of the Orthodox parish, Greg took a series of buses and walked two miles to reach the church. He stood to the side, experiencing his first ever Divine Liturgy.

When the service was over, a man approached him and asked him if he was new to Orthodoxy. When Greg said, “yes,” the man then asked him how he had heard about the Orthodox Church. “I paused for a moment,” recalls Greg, “considering my options. The open kindness of his eyes softened my heart and I told him that I learned about it in prison. He did not even skip a beat, then he said that there have been a number of people who found Orthodoxy in prison.”

The man who approached Greg probably doesn’t realize just how crucial his actions were. If he had rejected Greg, Greg may well have despaired. But by warmly welcoming him, the man made himself God’s instrument to bring healing to Greg.

Greg returned to that parish and met more people. When they asked him what brought him to the area, Greg admitted that it was parole. “That’s okay,” they responded, “Orthodoxy is full of repentant sinners.”

“I weep now as I realize the love and acceptance that was freely offered to me,” says Greg.

Would you have been ready had God brought Greg to your parish Would you have freely welcomed someone who had served time for committing a crime? When God brings people our way for the first time, we have no way of knowing where they have been and what they have experienced. In preparation for Great Lent, we read of the Parable of the Prodigal Son. Like the loving father who waits to welcome home the prodigal son, God may bring a “prodigal” to us and waits to see if we will welcome them back home for peace and repentance.