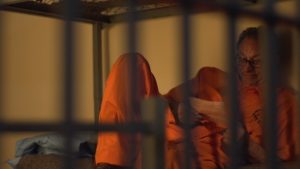 We often forget that our Lord Jesus Christ was a prisoner, that he himself experienced the loneliness, isolation and restriction that is prison. Perhaps that is why He commanded us to visit prisoners (Matthew 25:36 – “I was in prison and you visited me.”) But what is prison like and how does a prisoner spend a typical day? Orthodox Christian Prison Ministry recently interviewed a former prisoner who converted to Orthodoxy through OCPM while he was in prison. In this compelling Q&A, he gives us a glimpse of what life is like behind bars.

Question:  You were a minimum security inmate. What was a typical day in prison like for you?

Answer:  A typical day in prison will start at about 2:30 or 3:00 am in the morning — depending on what part of the facility you are in. They wake you up so very early because they need to get everyone fed by shift change at 6 am and so that the workday can start for those who work. For a lot of people in prison there is no work because there is only so much need for cooks, janitors, yard work. After breakfast a lot of people will end up going back to bed. If they have a radio, they may listen to it. Later in the morning you will have the choice of staying in your cell or going into the day room. There may be an opportunity to go outside. And you will do that until it is time for lunch. They start serving lunch around 10 am so that everyone is fed by the next count time at 12 or 1.

Answer:  The day room will have tables to sit at. There may be games to play such as dominoes, chess, checkers. There will be TVs to watch. A lot of people think TV is coddling inmates, but it can be more like a form of torture: you see all the commercials for all the great food that you can’t get and then you go to chow and see the slop they serve you. The TVs also help to babysit the people who don’t work. Ironically, the most popular prison shows are the cop shows. Prisoners love laughing at people who got caught–they just forget that they got caught but it wasn’t caught on video.

Question:  Are there alternatives to the day room?

Answer:  Some prisoners have work assignments in prison – such as laundry or cleaning. Others will spend time in the classroom working towards a GED or doing some college-level work. Others may spend time in a treatment program if they are addicted to drugs or alcohol or are a sex offender.

Question:  I didn’t realize that you awakened so early in prison.

Answer:  It can be very difficult to get the sleep you need. The dayroom is constantly noisy and they can be open until 11 o’clock. The prison cells face out into the dayroom. You may also be woken up in the middle of the night to be counted. Some prisons are counting prisoners every 3 hours. We shouldn’t be surprised that there is a lot of violence and tension in prison. We are dealing with people who are sleep deprived on top of being cut off from family. Also, you have to be on full alert all the time even if you are asleep. You must learn to be a light sleeper so that at the slightest touch you jump up ready to defend yourself. It is a very stressful situation.

Question:  What you have described is for a minimum-security inmate. What about those who are medium or maximum security?

Answer:  For a medium security inmate you will spend more time in your cell. You will be restricted at what you can get at the commissary. You may still go to school. You will have fewer privileges, less freedom to go to the yard, and the guards will treat you more harshly. For a maximum security inmate you are in your cell 23/7. You get one hour per day out of your cell in a cage by yourself for exercise. Most of your interaction is with the guards. You are going to be by yourself most of the time, which can be very psychologically damaging.

Question:  Is it true that prisoners can make alcohol in prison?

Answer:  Almost anything you can get on the outside you can get in prison if you have enough money. They are making wine inside the prison by stealing sugar, fruit, and bread (for the yeast to get the fermentation started). And contraband is coming in through a number of ingenious means. Prisoners have learned how to make something out of a little bit of nothing. The ingenuity is incredible.

Question:  What is it like to have correctional officers watching over you?

Answer:  There will be one set of rules for the prison. But how those rules are applied and which ones are enforced will vary from shift to shift and guard to guard. Part of what you have to learn is who is enforcing the rules and how they will enforce them. One guard may not care that you have icons on your desk, and another won’t let you have them out. They’ll do it just to have control over the prisoner. There are good guards. However, some guards fall prey to the weaknesses of the people they are guarding. Some may even smuggle drugs or other contraband into the prison. If there is a problem with bad cops, it is even worse with prisons. Besides the guards being poorly trained and underpaid, prisons operate under a cloak of secrecy. This secrecy can exacerbate the problems for those guards and administrators who have power and control issues.  There is no freedom of information act for prisons.

Question:  Tell us about gangs in prison.

Answer:  Being part of a gang is one of the ways you can survive in prison. The prisons do everything they can to control that activity. Gangs are formed partly for protection. It also gives them greater access to drugs, alcohol, sex, and pornography. The main thing about doing time in prison apart from the gang life is learning how to keep to yourself and minding your own business. If you see something, you didn’t see it. That’s to keep yourself from being labeled a snitch. If someone comes up to ask you to do something and asks you to join a gang, you have to say no. You may have to have your nose broken a time or two to back up your no but eventually they will leave you alone.

Question:  Is it possible to reform yourself in prison?

Answer:  Most people come out of prison worse than when they came in. Prison is primarily a warehouse for broken people. It is not primarily about reformation. It is primarily about vengeance. There are pretty horrible things that can happen to people in prison. Prison is where the worst in people often comes out (for prison employees) or is exacerbated (for prisoners). You must be dedicated and self-driven to change your life despite prison. Our prisons are nothing more than warehouses. They largely fail in helping people change their lives. And this isn’t because the people in prison won’t change; it is because they generally lack the appropriate means and opportunity.  Intended or not, the system is geared toward proving you are what you are and there is nothing you can do to change it.

Question:  What does a prisoner encounter as far as spirituality and religion in prison?

Answer:  In prison there are a myriad of Protestant prison ministries and well-meaning churches all claiming to possess “the truth.” As far as chapel, each week a different ministry would come and I gave them all a try. I marveled at some, wondering if we were reading out of the same book. Others I couldn’t run away from fast enough.

Question:  Does religion play a part in helping a person in prison to reform?

Answer:  Religion in prison is generally used for one of two purposes: for you to discover the truth about yourself or to help you avoid the truth about yourself.  The religions themselves are not responsible for this difference, although many are better at helping one to avoid the truth.  Even though a religion might help one to stop living a life of crime, it does not necessarily follow from that change that one is now living a life of truth.  Just as it was hard for me to realize when I landed in prison that I was a criminal and not the “Christian” I had thought myself to be, it may be hard for some to hear that there are many false religions, and they are a part of one.  So, why did I convert to Orthodox Christianity? In short, I converted to Orthodox Christianity because I was looking for the truth, particularly the truth about myself.  Here I was shown what repentance is really about and how to live a life of repentance.  More importantly, I was given the answer to “Why am I here; what is my purpose?”  I was a shattered mirror when I first encountered Orthodox Christianity; however, over the years Christ and the Church have helped me slowly glue the pieces back together so that someday I will hopefully be a full and accurate reflection of Christ.  In the meantime, “Lord have mercy!”

Sign up for our email newsletter
PrevPreviousHonoring the Virgin Mary?
NextThere’s That Tongue AgainNext