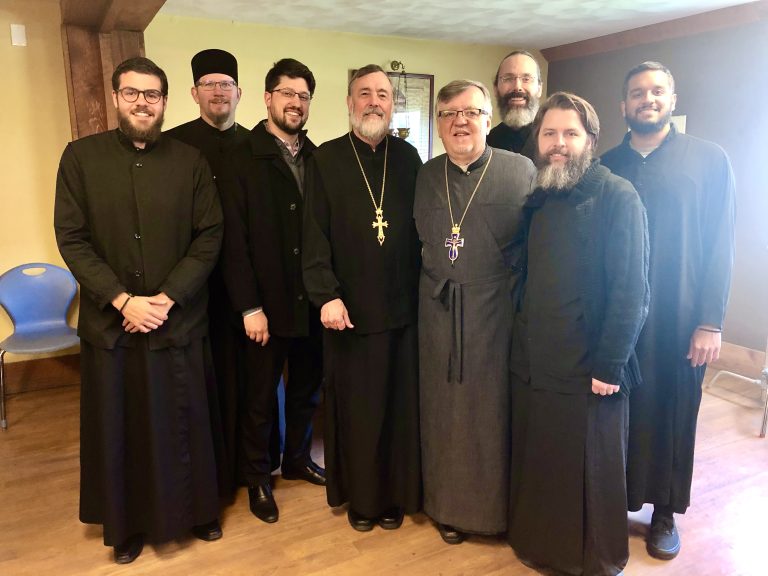 An OCPM visit to Pennsylvania Part One

If someone approaches you with anger how do you respond?

Last week, my colleague Fr. Stephen Powley and I visited SCI Waymart, a state prison in Pennsylvania. We made rounds with Fr. John Kowalczyk, an Orthodox priest and contract chaplain at SCI Waymart. At a certain point, we walked into a unit that had two or three day-rooms that shot off of a central control area. When we walked in, one of the correctional officers told Fr. John that an inmate was ranting and belligerent in one of the day rooms. They asked Fr. John if he could attempt to calm the inmate down. Right away I was struck by the respect these correctional officers had for Fr. John, to ask him to do such a thing. They know that Fr. John has a rapport with the inmates and can work with them in a unique way.

Spending time with Fr. John it’s clear why he has rapport with these prisoners: he loves them and sees the image of Christ in them regardless of their past. Fr. John treats these prisoners with dignity and respect. He calls them by their name. He asks them how they are and knows their stories. The prisoners respond to him with love as best as they can, some blatantly and verbally, and others over time as they share the stories of how they were blessed by his presence.

Fr. John talked to him quietly for several minutes and prayed with him and did a breathing exercise. When we left, the prisoner had calmed down and was sitting in the corner of the room.
A little while later we did a bible study on the unit and this man attended. He was clearly still a little off, and I think we were all a little surprised on our guard. However, he got through the bible study without incident and did not act out.

When we walked into the day room, it was clear that this prisoner was struggling and probably was not taking medication needed for a mental disorder. He started to yell at Fr. John and paced back and forth in the room. Most people would have feared for their safety, but Fr. John approached him very calmly and asked him to sit down.

This man is in a unit designed for mentally diabled prisoners. There is little doubt that his medication was a little off that day and his mental demons were springing out. The treatment team (including Fr. John) will continue to work with him on his mental health. However, on that day we could see the immense power and strength our Lord has in prison through men like Fr. John. Wherever we went in the prison, it was clear that both the prisoners and correctional officers alike have immense respect for Fr. John. In this dark place, the Love of Christ is brought through Fr. John’s demeanor and is then returned by the prisoners who have learned to pray or be grateful for small things or forgive others.

This is life at its extreme. However, the lessons are plain for each of us and applicable to not simply prison but our own day to day lives. The prisoners feel loved by Fr. John because he calls them by name and encourages them. This makes them feel at peace and helps them to work on themselves.

So, how do we encourage those around us? Are we tempted to respond to anger with anger? Had Fr. John approached the embattled inmate with anger or discipline he surely would have returned the same. What if we respond to anger with calm confidence instead? This is difficult but leads to not only peace around us but peace within. Perhaps consider making a plan to have a little prayer ready when someone irritates you or approaches you with anger. A plan and a little practice can prepare us for the moment so that each of us can spread the peace of Christ in this broken world. In the words of St. Seraphim of Sarov, “Acquire inner peace, and thousands around you will find their salvation.”