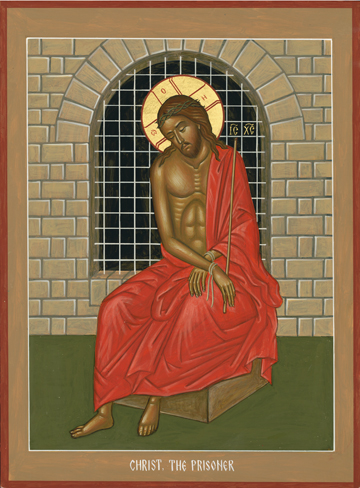 For nearly three years, Orthodox Christian Prison Ministry (OCPM) staff have been regularly writing to a prisoner, whom I will call Michael, who lives in a state mental hospital and suffers from delusions. The staff send Michael personal letters, cards with pictures of nature and wildlife, icon cards and even funny illustrations. Often, Michael’s letters are full of his delusions, but sometimes he has moments of clarity, such as when he wrote this:

Thanks for your recent letter and pictures. Yes, you two are very Hollywood . . . smile . . . You both are very interesting; and Zossima finds funny pictures a lot. Are you two best of friends?  Father Duane, you have a very cool beard . . . I keep you both in my prayers; I am grateful we are great friends. – love, Michael

Imagine you inhabit not one prison but two. That is the reality for prisoners like Michael who suffer from mental illness. Prisons are being called the new “asylums” because of the large numbers of mentally ill. According to the Treatment Advocacy Center, the Los Angeles County Jail, Chicago’s Cook County Jail, or New York’s Rikers Island Jail each hold more mentally ill inmates than any remaining psychiatric hospital in the United States.

How do you minister to such suffering? For the staff of Orthodox Christian Ministry, those who are mentally broken are still icons of Christ, made in God’s image, and worthy of our most devoted ministry and care. That care has come largely through OCPM’s Correspondence Ministry.

OCPM regularly writes letters and sends materials to prisoners regardless of their mental condition or whether they write back. There is a prisoner named Thomas who lives in a forensic unit (for mentally ill prisoners) in a Pennsylvania state prison who had not received mail in 15 years. The chaplain there asked OCPM to write to him. Thomas was deeply affected by the personal letters. He even started painting the postcards of nature that were sent to him. His condition was so improved by this new care and attention to his life that the doctors were able to significantly lower his psychiatric medications. When a psych patient has their medications lowered it means that they are able to handle reality on their own.

When a person is locked up, one of the most important parts of their day is when they get to hear their name spoken at mail call. It is a spark of recognition and a reminder that they are not forgotten. One prisoner recently wrote to OCPM: “In a world full of chaos and craziness you are a solid rock that keeps people like me anchored to Christ and keeps us focused on the things that are important, true, pure, and holy. We couldn’t do it without you and others like you. So, thank you.”

In our Orthodox services, we often say, “remember me O Lord in thy kingdom.” As long as we are in God’s memory, we continue to exist. If God were to forget us, we would cease to exist.

That is what Orthodox Christian Prison Ministry strives to do with all the resources at our disposal. We remember those who are easily forgotten and give them a reason to hope.