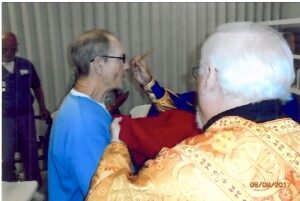 When Deacon Seraphim Blackstock began visiting men in a Florida prison, he started out, in his own words, “very arrogant”.

“I went into the prisons with the idea I was helping these guys. They’re felons. They’ve committed horrible crimes. I’m doing them a big favor.”

Dn. Seraphim would soon find out that there was much these men in prison could do to help him too.

Most Christian prison chaplains start by teaching the Bible before doing anything else. As Dn. Seraphim started to volunteer and observe, there was something about this approach that just felt off.  “Many prisoners already know the Bible quite well. These guys have nothing to do but read the Bible all day.”

Instead, Dn. Seraphim decided to simply talk to these men in order to build relationships with them. “You have to make a friend first. You show up, you visit them, you let them lead the conversation. You keep your promises.”

One of the friends Dn. Seraphim made was a man named Thomas, who is a prisoner on death row. Dn. Seraphim is constantly in awe of Thomas’ positivity despite the harsh conditions. “Thomas sees the sun for only one hour a day, when he is let out for exercise. And yet, in fifteen years of visiting him, I have never once heard him complain. Every time I am able to go in and see him, he had a big smile on his face.”

After building a relationship and many long talks and catechism, Dn. Seraphim had the opportunity to help baptize Thomas into the Orthodox Church. Because Orthodox Christianity is still a minority in America’s prisons, the basic mechanics of an Orthodox baptism are made even more difficult.

“Priests have to spend almost an entire day getting through security, perform the baptism, and then back through security a second time. Prison guards go through all items one by one, asking you what each item is for.”

Thomas was escorted into the prison chapel by guards. His hands and feet were still in chains when he went into the baptismal font, but inside he was a free man. Afterwards, when Dn. Seraphim served Thomas Holy Communion, Thomas smiled and said, “This makes everything OK.”

But the impact of Dn. Seraphim’s ministry to Thomas didn’t end with one man. Thomas had been ministering to another inmate sentenced to death named Kevin, just a few cells down from him. Kevin and Thomas would talk through the air vents.

Kevin had memorized the entire “Little Red” Prayer Book for Orthodox Christians. “I couldn’t believe it,” Dn. Seraphim says. “I tested him, and he rattled off every prayer verbatim.” Shawn asked to be received into the Orthodox Church, taking St. John the Forerunner as his namesake.

Now John continues to impact Dn. Seraphim. “I get letters from him, and these letters bless me. These men have become a part of my life every day. I feel connected with them, joined with them. That’s the power of God.”

If you have ever considered starting your own local prison ministry, Dn. Seraphim is a beautiful example of the turnaround many people involved with OCPM have attested to.

“I am so humbled when I bring these men the Body of Christ. I entered prison ministry to save the souls of these prisoners,” says Dn. Seraphim, “but they are saving mine.”

Sign up for our email newsletter
PrevPrevious“Not my will, Lord, but Your will be done!”
NextWhat ever happened to the Tree of Life?Next