In part 2 of this marvelous teaching, St. Cyprian continues to enlighten us on what impact jealously and envy can actually have on us:  “Why do you rush into the darkness of jealousy? Why do you enfold yourself in the cloud of malice? Why do you quench all the light of peace and charity in the blindness of envy? Why do you return to the devil, which you had renounced? Why do you stand like Cain? For that he who is jealous of his brother, and has him in hatred, is bound by the guilt of homicide.” 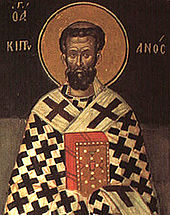 12. We ought to remember by what name Christ calls His people, by what title He names His flock. He calls them sheep that their Christian innocence may be like that of sheep; He calls them lambs, that their simplicity of mind may imitate the simple nature of lambs. Why does the wolf lurk under the garb of sheep? Why does he who falsely asserts himself to be a Christian, dishonor the flock of Christ? To put on the name of Christ, and not to go in the way of Christ, what else is it but a mockery of the divine name, but a desertion of the way of salvation; since He Himself teaches and says that he shall come unto life who keeps His commandments, and that he is wise who hears and does His words; that he, moreover, is called the greatest doctor in the kingdom of heaven who thus does and teaches; that, then, will be of advantage to the preacher what has been well and usefully preached, if what is uttered by his mouth is fulfilled by deeds following? But what did the Lord more frequently instill into His disciples, what did He more charge to be guarded and observed among His saving counsels and heavenly precepts, than that with the same love wherewith He Himself loved the disciples, we also should love one another? And in what manner does he keep either the peace or the love of the Lord, who, when jealousy intrudes, can neither be peaceable nor loving?